The promoters of the cooperative Vidàlia, have converted this old textile colony of Berguedà into a self-managed community, thus returning to «give life» to an old urban nucleus that was destined to disappear.

«These streets used to be full of life, but then the crisis hit, and many people decided to move to other towns and cities», said Pilar, one of the women who has been living in this former Catalan textile colony for the longest time, as she looks under the hood of her old Citroën.
Colònia Vidal, located in the Berguedà region, an hour’s drive from Barcelona, is one of the last to be built in Catalonia, around 1901. It was conceived as a self-sufficient colony, with housing for workers, stores, church, school, and everything an urban center needs to develop.
It is strategically located next to the Llobregat river, as this is where the energy was extracted to run both the factory, specialized in the production of high-quality fabrics for sheets, and to provide electricity and energy to all the houses in the colony.
Around 1905, around 200 people came to live there and everything seemed to be going smoothly in Colònia Vidal, there was work for everyone, the urban nucleus had more and more houses and in the streets that separated some rows of buildings from those in front, people socialized and children played in a family atmosphere.

It was then when the textile crisis hit hard in Catalonia, which accompanied by a process of deindustrialization, saw how more and more companies decided to bet on a product produced outside our country, at costs with which the companies here simply could not compete.
More and more families were leaving the colony and due to a shortage of work decided to move back to the city or to the surrounding villages and start a new life. Finally, in 1981, Colònia Vidal had to close definitively and it was later, in the year 2000, at the height of the real estate boom in Spain, when the Vidal family decided to sell the complex to the American real estate company Hines.
This American company had plans to convert the former Colònia Vidal into a residential and tourist complex located just an hour from Barcelona, but in the end, this project ended up going awry due to the big crisis in the real estate sector that affected Spain in the following years.

«When we came here with our project, there were barely 10 people living in the former Colònia Vidal,» says Daniel Hayes, one of the driving forces behind Vidàlia project.
Daniel is Dutch and has lived with his two children and wife in the colony for several years. He has dedicated part of his life to self-managed community projects such as Can Masdeu, where he spent more than ten years.

Thus, the Vidàlia project, created by a group of young people of different nationalities, came to Colònia Vidal in 2016, with the idea of drawing up a rescue and management plan for a century-old and historic property that had been practically abandoned. They were also joined by people who had experience in community living and who were interested in starting a new project in Central Catalonia. Finally, after presenting the project, the promoters of Vidàlia signed a 75-year «farm contract» with the current owners of the property, thus saving it from falling into the decadence in which it had been settled for many years.

Vidàlia has promoted a self-sustainable project, based on an energy efficiency plan, cleaning and reconstruction of parts of the old colony and promoting good relations and coexistence between the last remaining neighbors and the new members who want to be part of this project.
Its operation as a self-sufficient group is very simple. What they propose is basically to offer people who want to participate in this project a rental of urban farm, therefore at a very low cost, in exchange for their commitment to perform a series of tasks distributed by hours during the month.
The tasks are different and varied: cooking, taking care of the garden, or rehabilitation of the property are just some of them.
It is therefore, a system of coexistence as simple as efficient, although people who want to join the project, must first pass a form of «selection» to ensure that the coexistence of all members of the colony is compatible, because the idea that promoters have of this project, is that they get to live with a maximum of about 200 people.

In addition, this self-sustainable space also promises to be an important point for artists and creatives, as spaces are being created where they can give free rein to their ideas and exhibit their work, thus turning this former textile colony into a place of cultural interest in the area of central Catalonia. 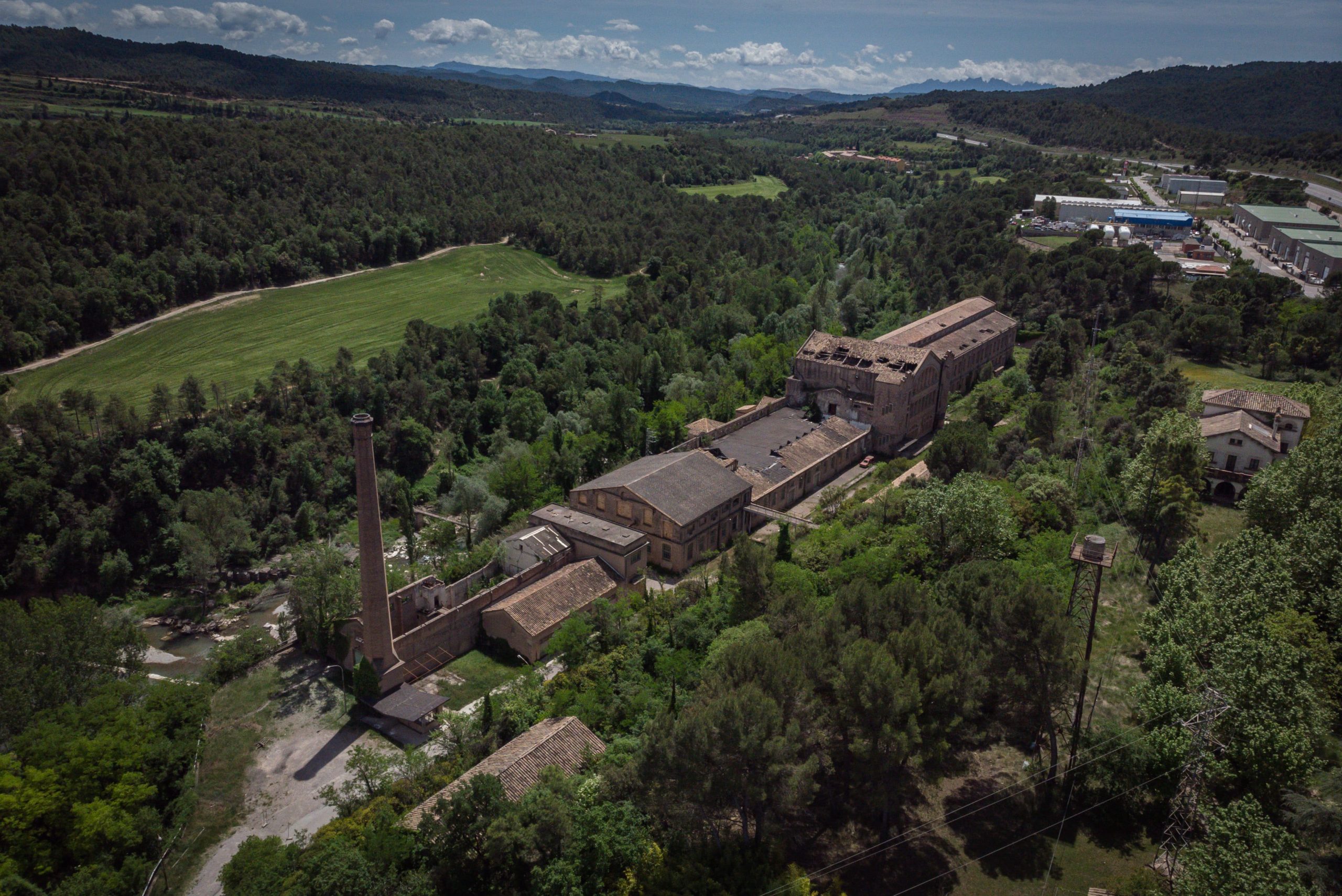 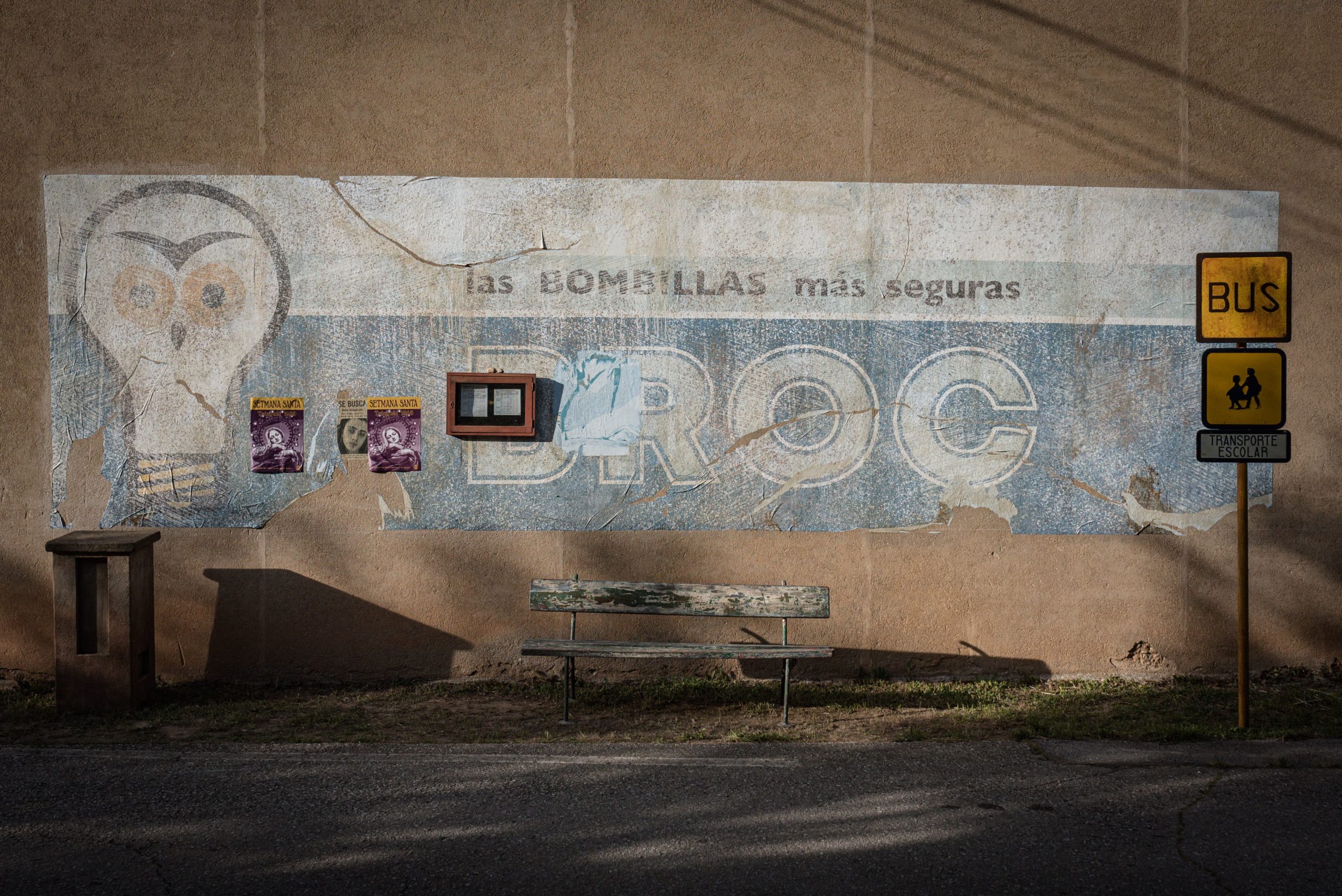 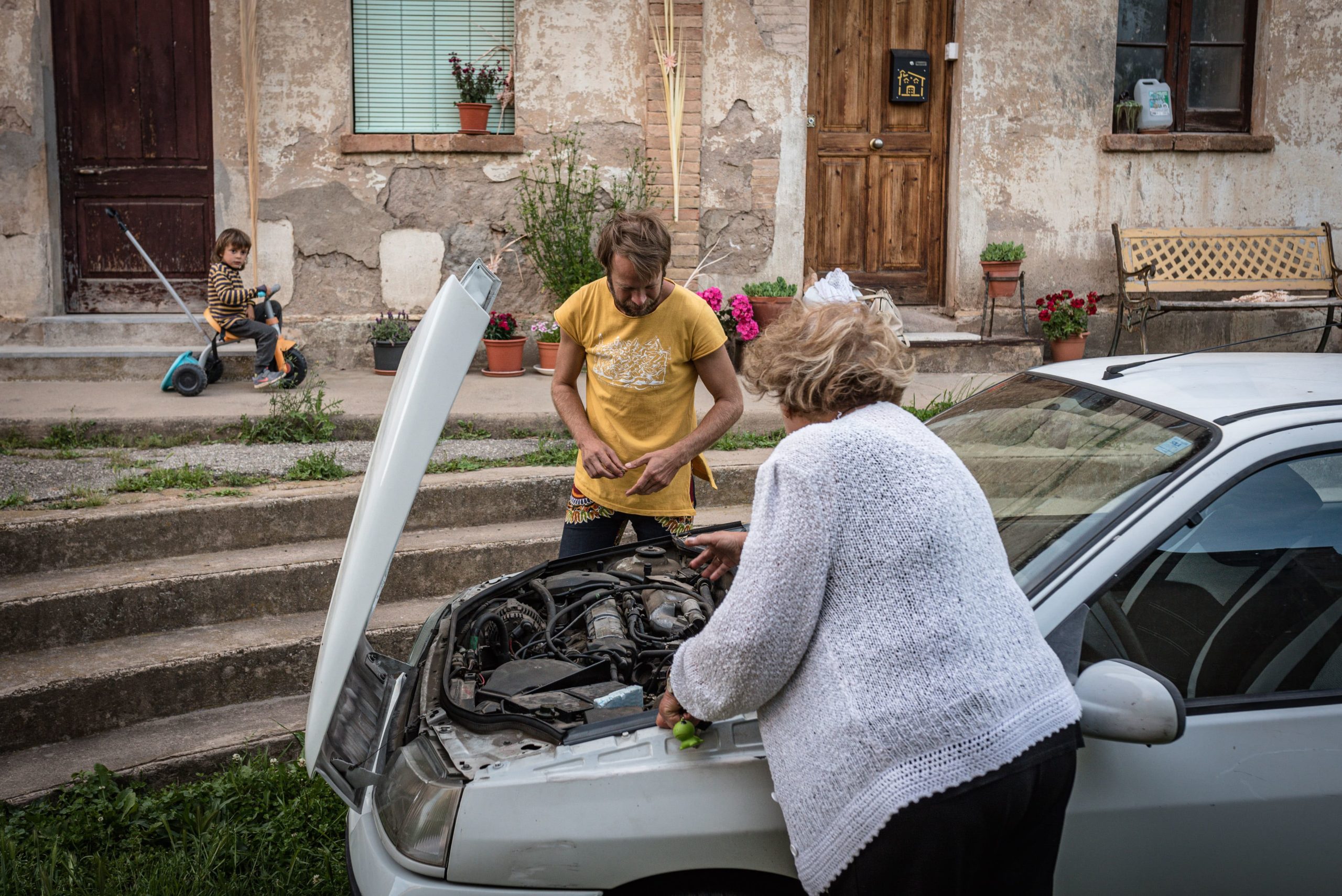 May 8, 2021. Daniel, one of the promoters of the Vidàlia project, helps to check the car of Pilar, one of the neighbors who has been living in the former textile colony for the longest time. Puig Reig, Barcelona (Spain). 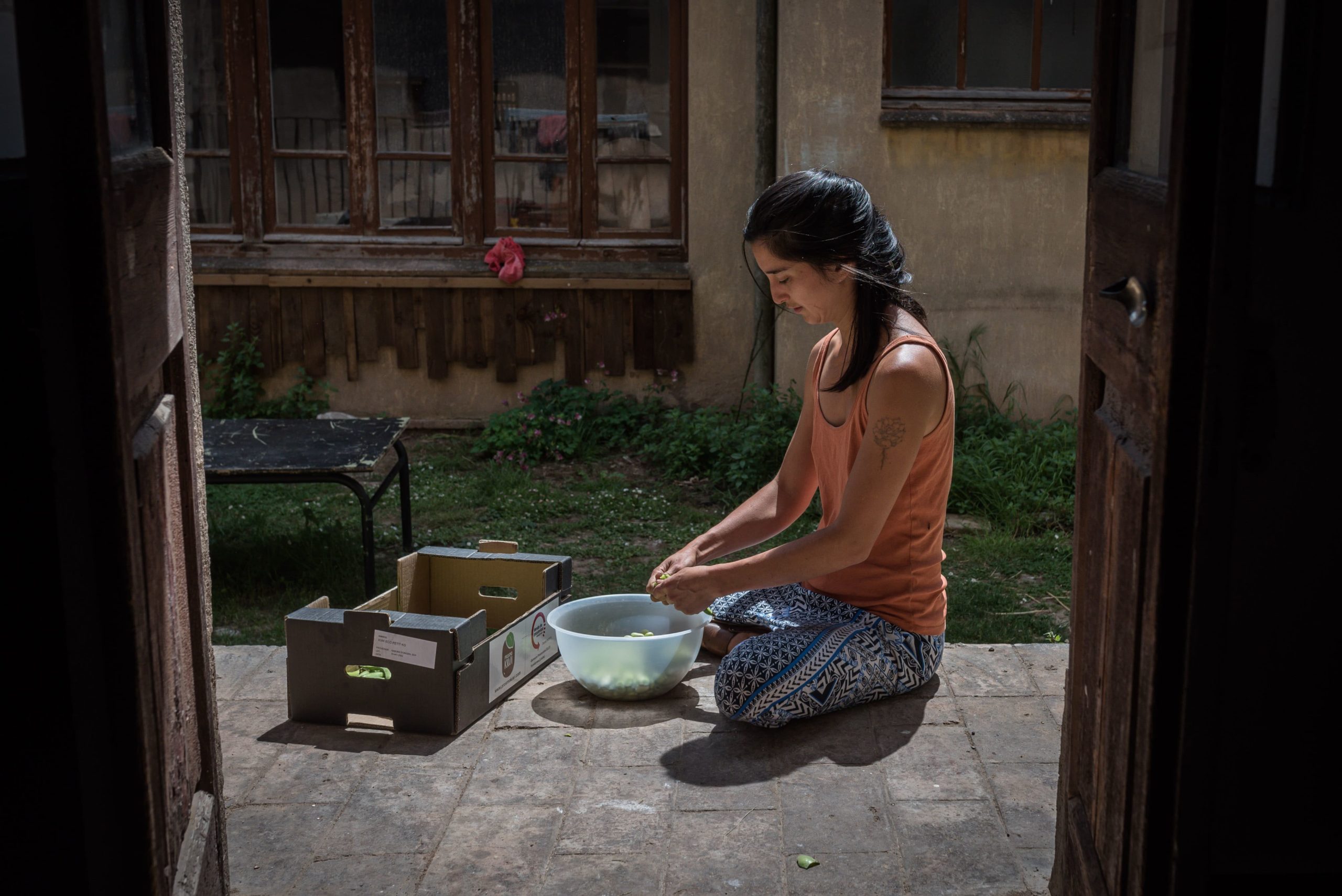 May 19, 2021. Kalu, one of the community girls, is cleaning vegetables for the group. This girl is mainly in charge of the vegetable garden. Puig Reig, Barcelona (Spain). 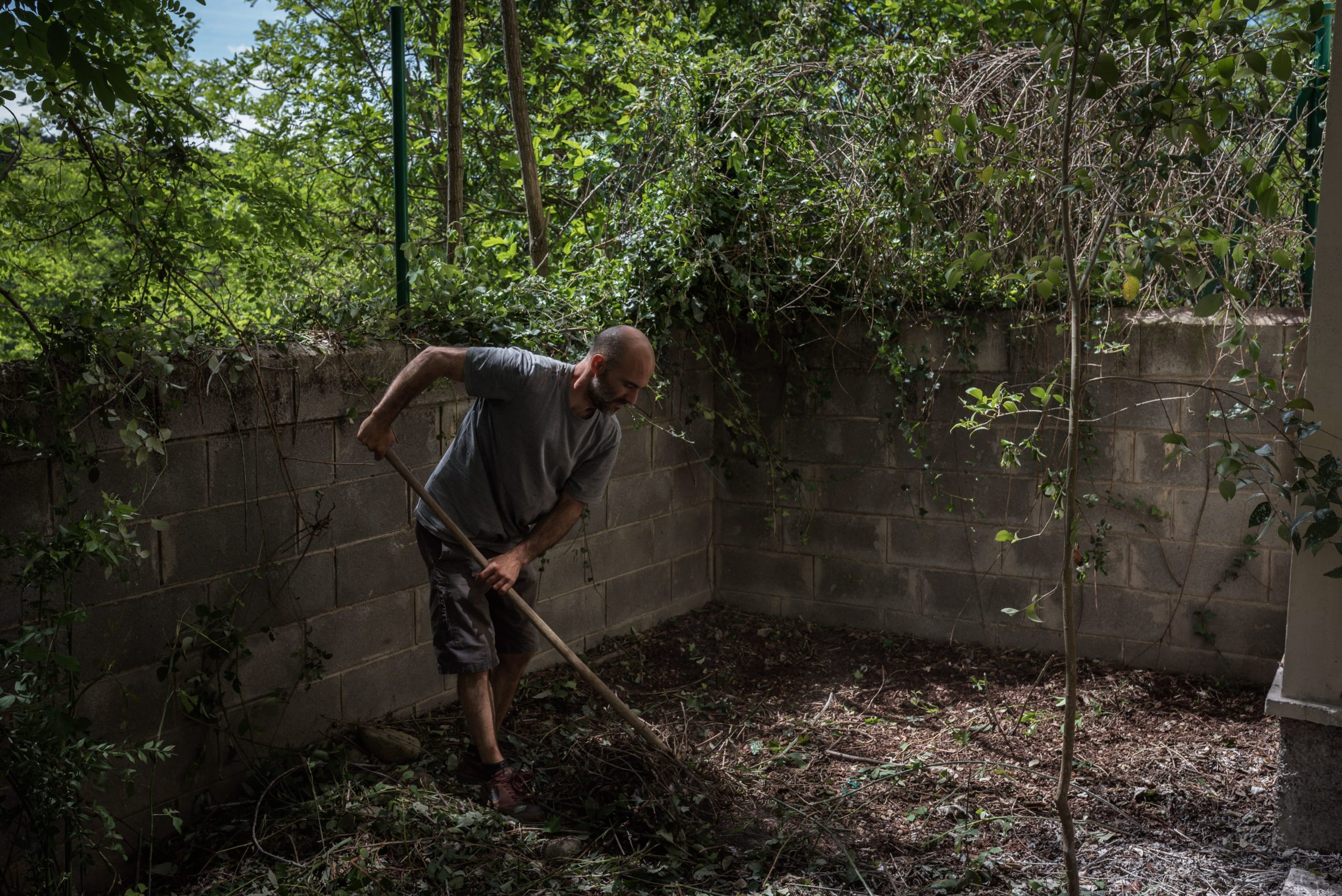 May 19, 2021. David is in charge of cleaning up and preparing one of the gardens of a building in the old textile colony, which will later be used as a space for activities. Puig Reig, Barcelona (Spain). 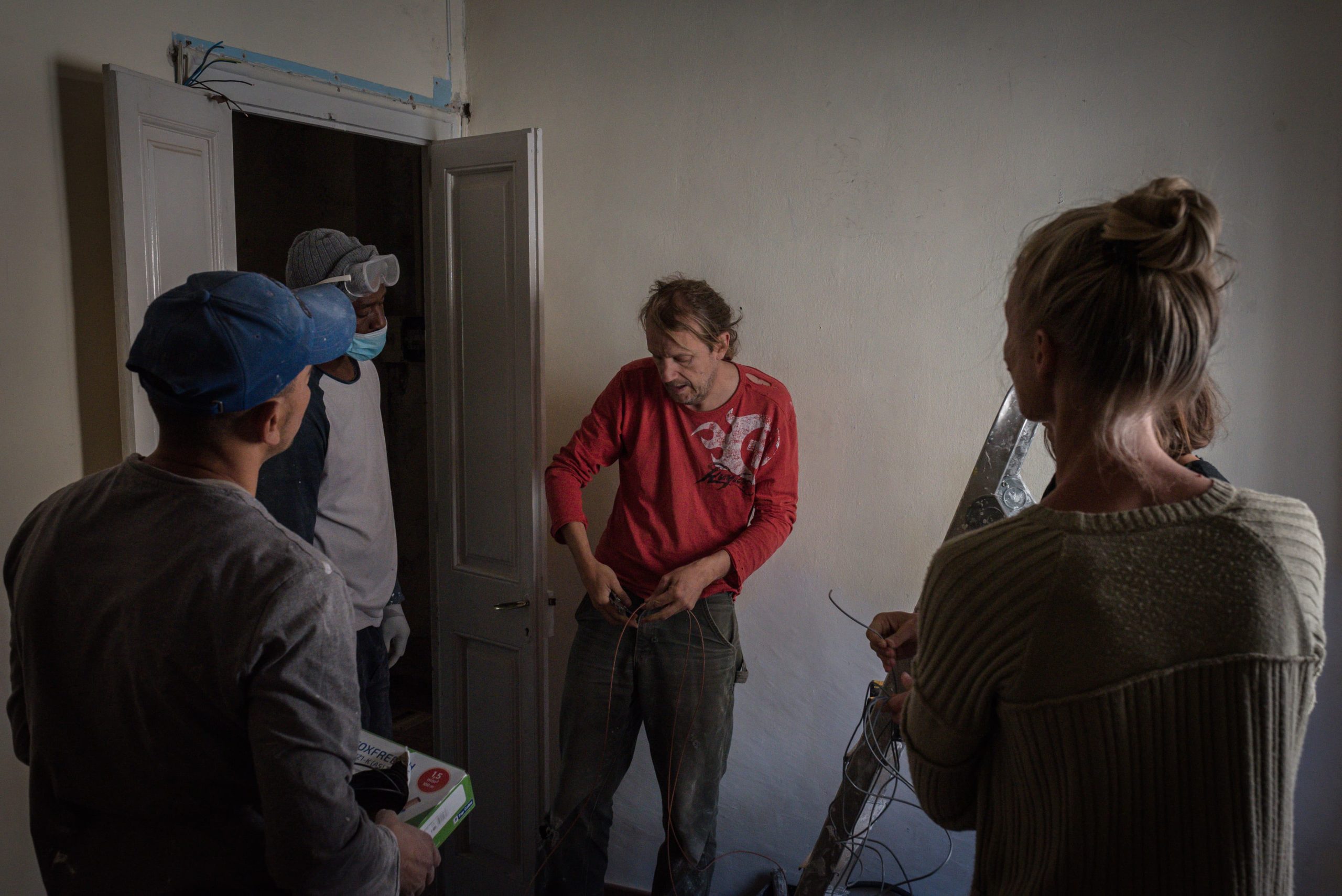 A member of the community, is teaching an electrical maintenance workshop to other members of Vidàlia. Puig Reig, Barcelona (Spain). 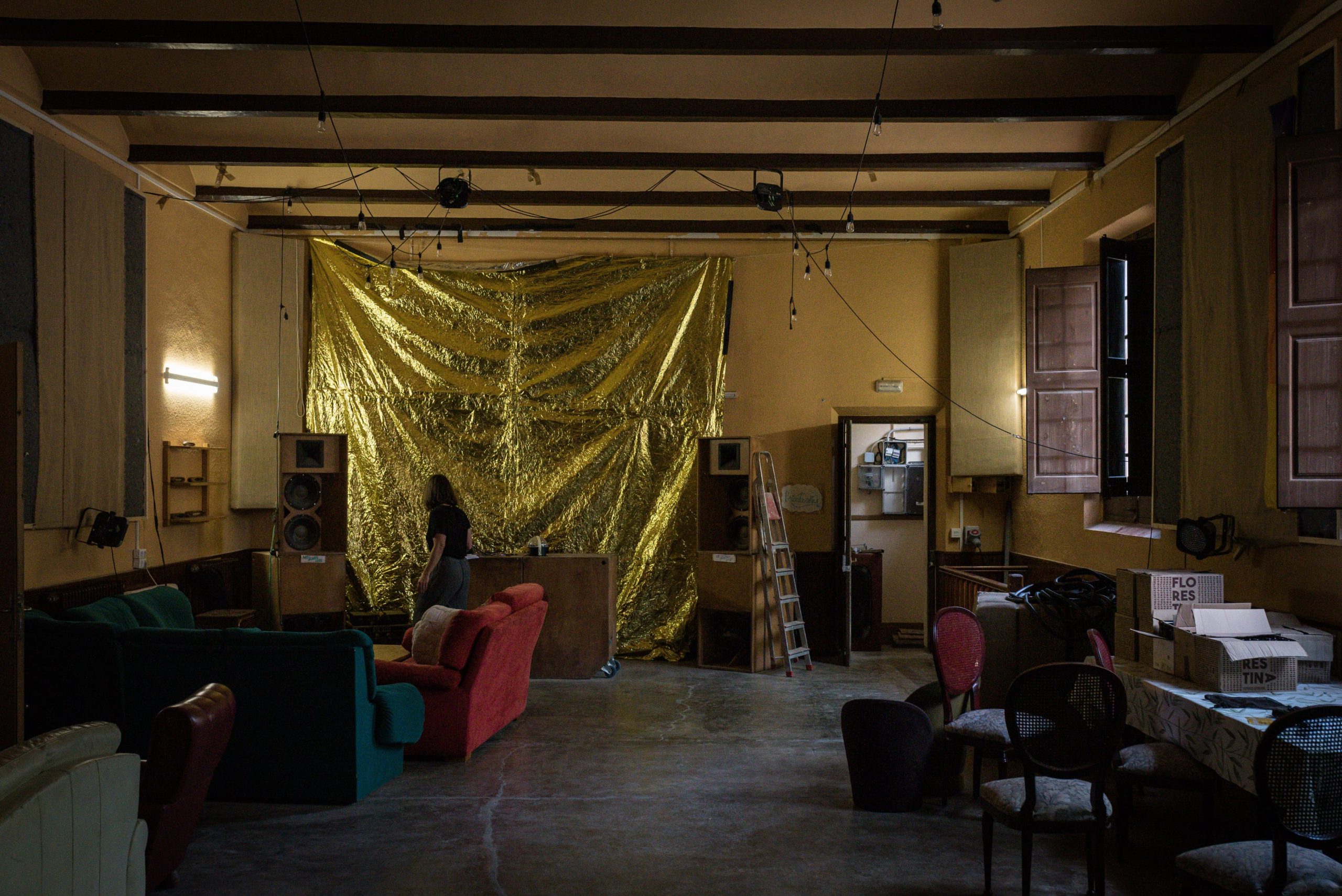 May 19, 2021. One of the community members is walking in the space set up as a cultural center, where exhibitions are held and different kinds of art are produced. Puig Reig, Barcelona (Spain). 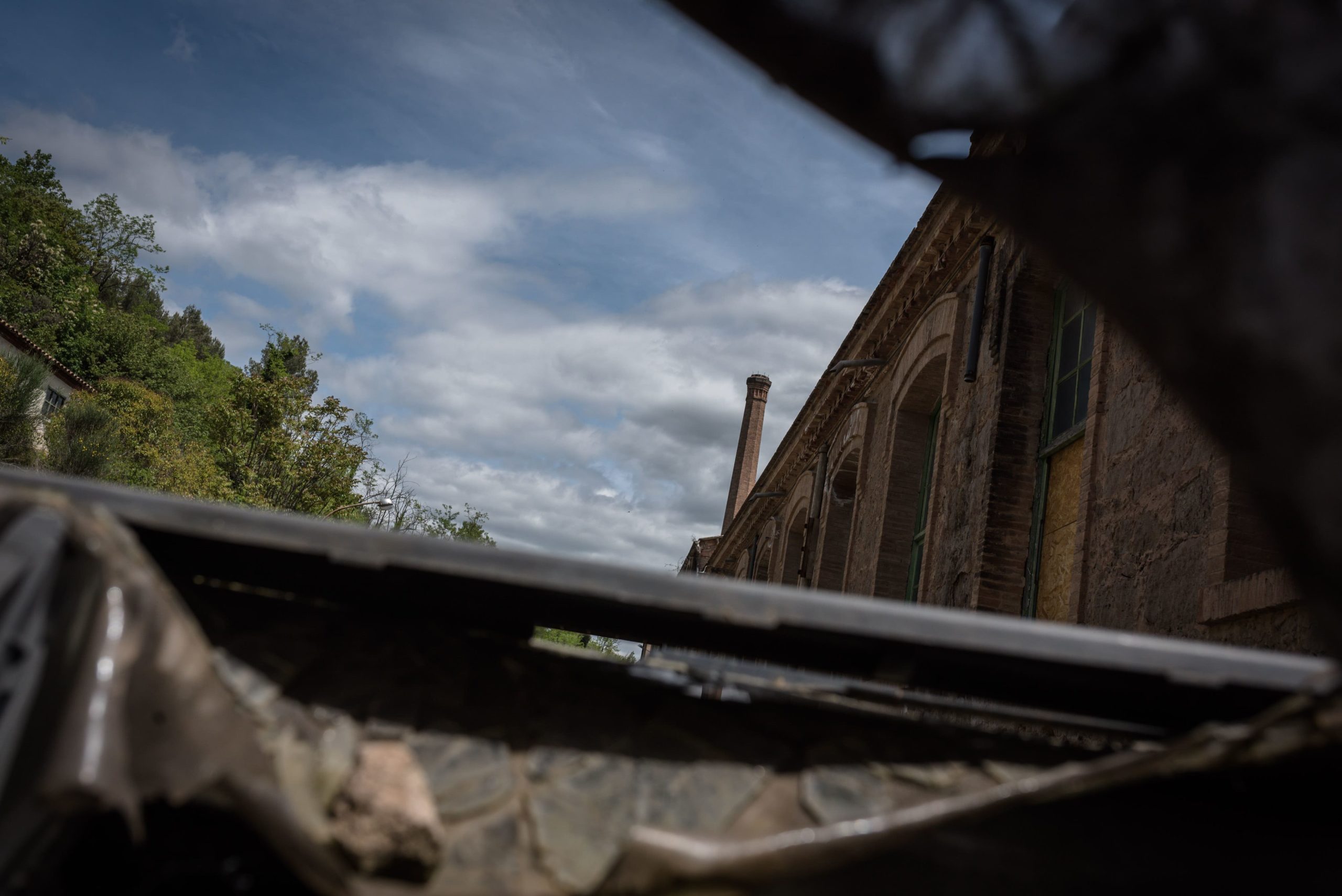 May 19, 2021. View of the chimney of the old textile colony factory, from inside an abandoned car. In the area there are still remains of tools, objects and other utensils that were used when the old factory was still in operation. Puig Reig, Barcelona (Spain). 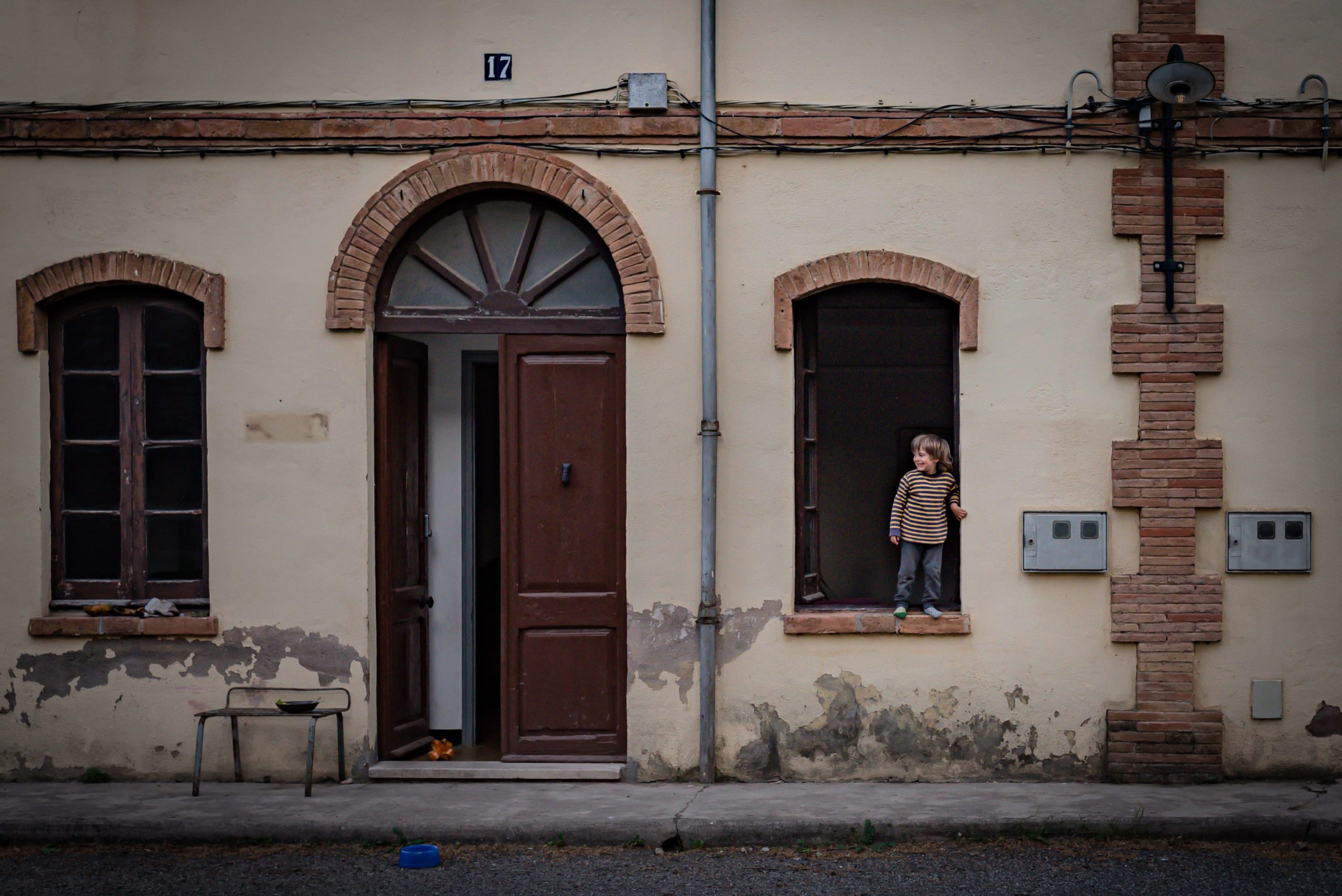 May 8, 2021. Vitai, one of Daniel's sons, plays at the window of the community commissary, one of the group's logistics centers. Puig Reig, Barcelona (Spain). 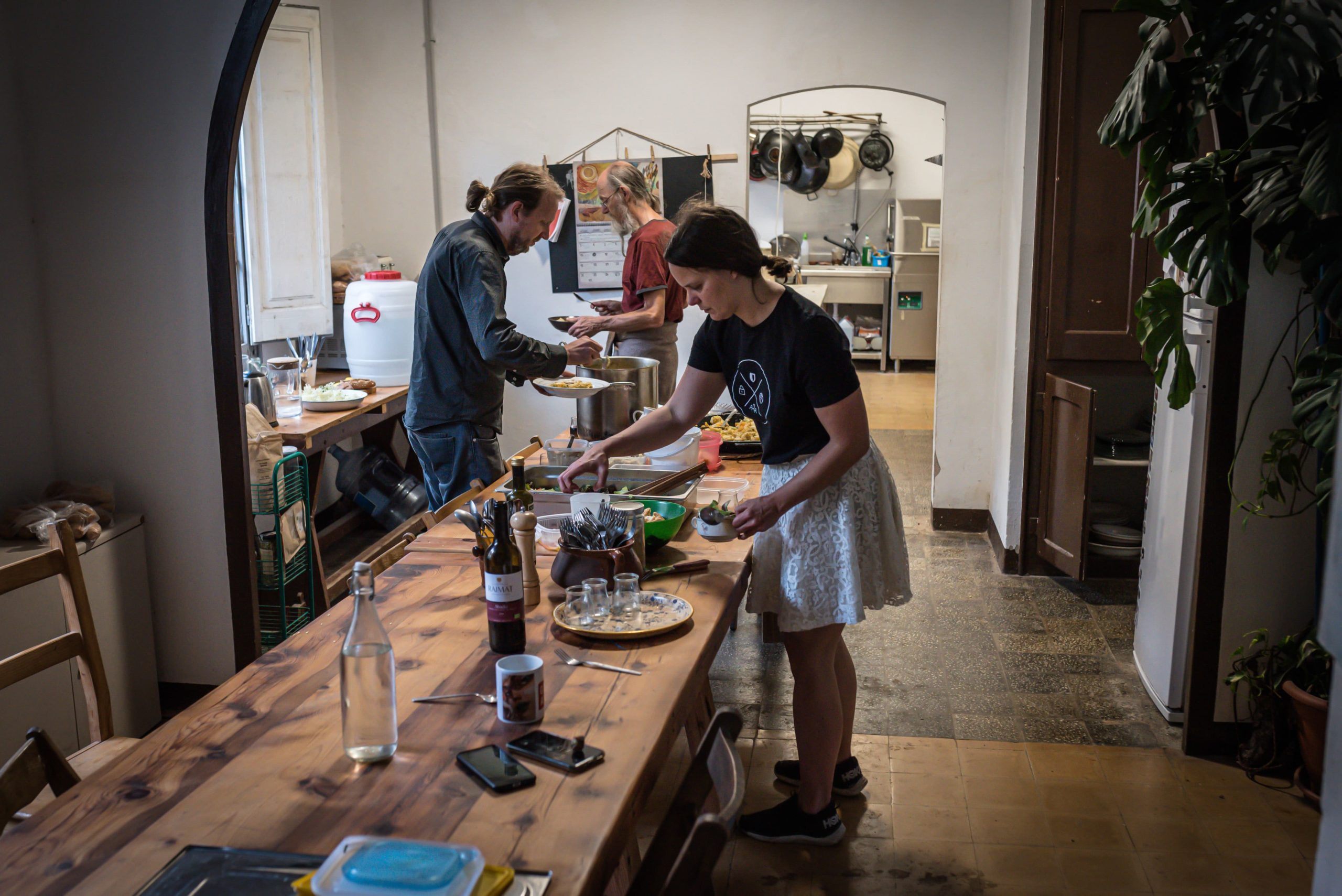 May 8, 2021. Different members of the group serve their dinner inside the kitchen used by the community to prepare the food. Puig Reig, Barcelona (Spain). 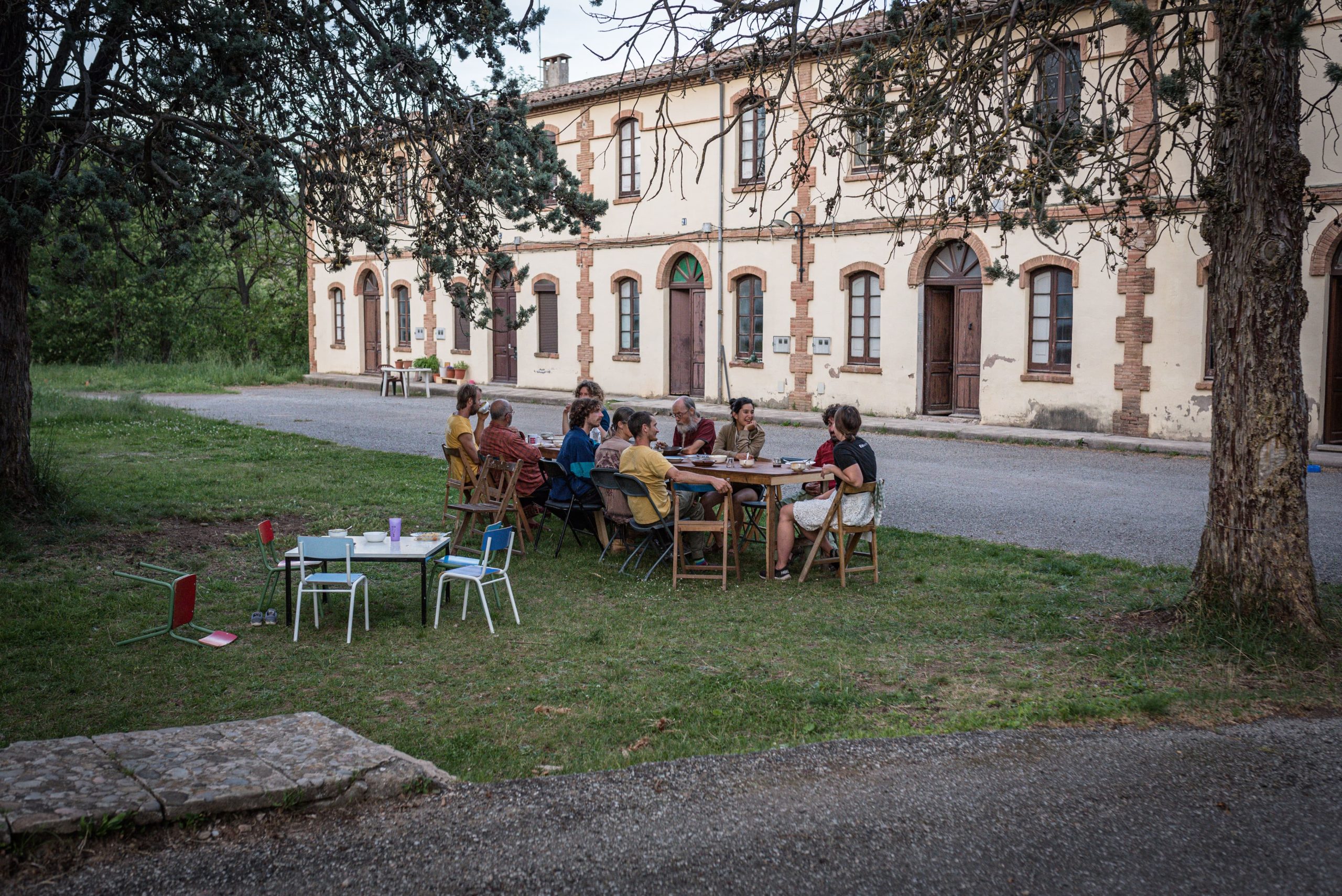 May 8, 2021. Community members share dinner together as a group. This is one of the moments of the day when practically all the members who now live in the former textile colony come together to enjoy a meal. Puig Reig, Barcelona (Spain).
© 2020 – adriasalido – Tots els drets reservats – Privacy policy